Oooh, look what I can do now! 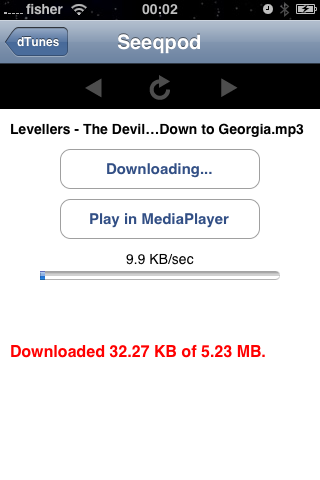 Okay, my earlier comments around the potential pointlessness of jailbreaking an iPhone are null and void after I discovered dTunes, an application which *ahem* allows you to locate music you already legally own and download it, there and then.  It can play it too, unfortunately the music isn’t available in your iPod functionality, but it’s easy enough to listen via the inbuilt music player and then once you’re at your PC or Mac retrieve the music and import it into iTunes as usual.

Very impressed indeed!  And as you can see, it even found a Levellers B-Side, so it’s not doing too badly at all on that front!

It is perfect for those times when you’re out and about and randomly think of a tune (or perhaps hear it, then use Shazam to identify it), but have forgotten it by the time you’re in a position to do anything about it… so anyway, yes, installed, tested, very impressed.  Get yourself on Cydia and install it!