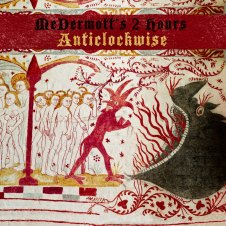 I’ve written about Nick Burbridge and McDermott’s 2 Hours on these pages before.  McDermott’s are one of those bands that fit typically into the canon of ‘bands nobody has ever heard of’ depending on which circle of friends I’m talking to, although – led by Nick Burbridge – you get the impression that that’s kinda the way he likes it.

They thrust themselves into my consciousness through my many-years-standing obsession with the Levellers.  The band, like the Levs, hail from Brighton and have been a huge influence as well as collaborator with the more well-known folksters.  Whilst the Levellers became well known, Nick and McDermott’s 2 Hours remained wilfully obscure – indeed, whilst remaining active, as well as creating awesome music Nick also writes poetry, novels and stage plays.

Anticlockwise is an interesting concept, and one that perhaps seems strange until you give it some thought – it’s a compilation of twelve tracks from previous releases, combined with two teaser tracks from an album to come out next year.  It’s comforting to listen to familiar songs, but spruced up with remastering and then move into a taste of what is to come.

What are they like?  I find Nick’s singing mesmerising, he plays with lyrics that evoke such strong emotions and imagery coupled with fine folky but ballsy musicianship.  It’s uncompromising and it’s all the more beautiful for it – in an era of shiny and polished ‘personalities’ with no soul or purpose, Nick’s deft avoidance of the limelight and the media circus that necessitates any degree of mainstream musical success is wonderfully pure.

As for the selections – well there are songs by McDermott’s 2 Hours that I like better than some that make the ‘cut’ – but nonetheless, there’s not a bad track on here.  Opening with ‘Dirty Davey’ is apt – this is the song I and I’m sure many others discovered the band through as it was covered by the Levellers.  It then skips through a diverse mixture of stomping band epics and acoustic numbers from the band’s back catalogue and then of course two from their future-catalogue.

There’s a mixture of tracks from McDermott’s 2 Hours on their own as well as a number from their awesome collaboration albums with the Levellers – you get a real flavour for the different levels of energy that they create.  Hopefully it piques your interest and it inspires a bit more exploration, because if you don’t listen to it and then go and avail yourself of the album The Enemy Within and definitely Nick’s project with Tim Cotterell Gathered then you’re really missing out.

I’ve thoroughly enjoyed it, and I guess it would be even more perfect for a person discovering the band for the first time – a taster of sublime quality, and with the band’s back catalogue now available as digital downloads on iTunes or Spotify if you find yourself hooked you can sate your appetite for more very easily whilst anticipating the release of the new album Besieged in early 2014.  Do yourself a favour and get yourself some awesome music!

Whether he craves it or wants it or not, Nick Burbridge deserves the accolades he’s received (such as songwriter of the year from SpiralEarth) and more.  This compilation is a lovely edited introduction to the fantastic work he and his band have been creating over many years, and will hopefully inspire you to dip further into their impressive back catalogue.