The fat of the land.. 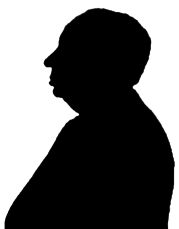 “Revenge is sweet, and not fattening”

Hmm, since I wrote the last blog post (or maybe some time in between the last two blog posts if I think about it) I’ve shed about a stone and a half.  I’ve never really been bothered by body image, my general default setting is overweight but reasonably fit through regular football – but I guess the ravages of age combined with a continued “If I want it, eat it” policy finally caught up with me when I had an ‘Alfred Hitchcock’ moment when vacating the shower a few weeks back.

That said, the picture my friend Chris took of me with the ridiculous tall Levellers fiddler Jon Sevink does, on reflection, look like a picture of a normal sized but skinny guy with a short fat man.  Worrying!

The only time I’ve actively been on a weight-loss drive was a crash-course to shed some pounds before a Sky Dive.  Only to find that they never even bloody weighed me so I could’ve easily got away with it!  This time around with the ubiquitous nature of Smart Phones I’ve brought technology to the heart of the process, because let’s face it, if I get to do that it’s more likely to motivate me!

Strange really – it’s the age old tried and tested formula, eat less – in my case – I’ve made tentative starts in taking up running, but I’m not very fond of it early doors, but in a typical week I’m pretty happy with my exercise levels.  It’s the taking the time out to consciously note what I’m eating that’s been quite illuminating – the App I’m using (MyFitnessPal) will scan barcodes or let me ‘quick add’ calories (and indeed, strike them off for exercising). 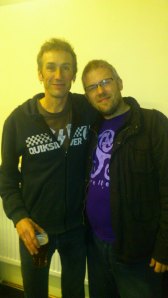 I’ve been generally eating under 1000 calories a day net of exercise (with a few significant blips for nights out or special occasions) and after the initial shock-factor am actually not finding it too bad.  The first couple of weeks were tricky, particularly balancing getting lunch right on football days to give me the right fuel levels – but I think I’m just about there.  Of course, a mild stomach infection or minor case of food poisoning probably fast-tracked a few pounds off as well!

In other news next week is a swanky awards dinner at work at which I’m up for an award for being a ‘Community Hero’ at work – which is mostly very humbling and flattering, and a little bit awkward – because, well, contributing to charitable endeavours or community projects isn’t something you do to snag awards.

Further forward in time I’ve booked tickets for the Levellers playing an Acoustic gig in Buxton with Cat – since it’s a sit-down venue it makes it a bit more sedate than a typical Levs gig, which I can make up for at the Splendour Festival in Nottingham a little beforehand, and more-than-likely at Rock City in November too.  I’ve also booked tickets to see the Wonder Stuff, Pop Will Eat Itself and Jesus Jones in Birmingham just before Christmas which is rather exciting.

To return to topic, so to speak, I plan on keeping up project weightless for another stone or so, I think – that will put me comfortably in the normal BMI range (another 5 or 6 pounds will put me at the top end of normal).  Then I’ll probably just lapse into old habits and balloon into a big fatty again!