I wanna rock and roll all night!

This is what we got up to at work a little over a week ago – it was fun, and as part of a day raising funds and awareness for the Boots Benevolent Fund, it was also for a great cause.

There’s some pics on my Flickr stream too, for your amusement.  It’s definitely amongst my favourite fancy dress shenanigans for a while, and I do think such things are generally enhanced by them taking place whilst you’re at work at being paid for it! 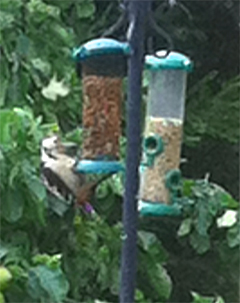 Woodpecker! What a refreshing change!

In other news we spotted a woodpecker in the garden today feasting on peanuts with the usual woodpigeons, doves, sparrows, starlings and finches.  Quite exciting really, he was pretty brave too – only flying off when we lurked a little too close to the window, hence the shit quality of the picture.

We’ve also turned our bedroom into, literally, a bedroom – we’ve acquired a massive bed courtesy of my folks who didn’t want it any more which is ace.  So Friday evening was spent assembling that, then popping to Rich’s to reassemble our old bed at his place – which means nothing goes to waste!

In technology news Apple have acknowledged there’s an issue with the new iPhone and as such will issue refunds on request, or give people a free case which should negate the issue.  I must say I’ve not had too many problems with mine, that said, I get a poor signal at home anyway on O2 – and holding the phone in the ‘death grip’ does seem to be slightly worse, but well, meh.

I’m no Apple fanboy really, but it seems to me that people and the media seem all the too keen to try to knock the hitherto whiter-than-white company – and Steve Jobs – off the perceived pedestal, and taking great delight in it – rather than actually reporting anything that’s a general problem.  That’s my take on it anyway.

2 thoughts on “I wanna rock and roll all night!”