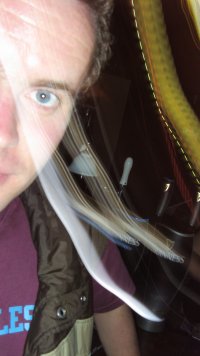 Went out on the razz with Rich last night.  We initially met with Lucy and her Rich in the Ropewalk where we imbibed freely of ‘Brothers Pear Cider‘ – a heady perry that clocks in at 7% abv, so after a litre and a half of that each we were feeling suitably merry.  We parted company with Lucy and Rich and headed over to Junktion 7 in order to check out The Fakers who were playing that night.

For those that don’t know, Dave – The Fakers frontman – is known to both me and Rich since he works at ‘the empire’, and the band were instrumental (no pun intended!) in organising the Clough Aid gig last year, which raised over two grand for the Brian Clough statue fund.  If you are after a comparison sound for them, then it’s quite a tricky one – but they’re heavily influenced by indie music clearly, with a subtle hint of ‘The Who’ thrown in.

As ever, they rocked the place – I would urge you strongly to check them out if you get the chance.  Clough Aid taught me that there are some bloody good unsigned bands in Nottingham, I’d love for one (or indeed, all!) of them to get signed up and make it – come on you stuffy label bastards, get your arses to Nottingham!  It’s about time someone took the ‘famous band from Nottingham’ mantle away from Paper Lace!!

So yes, they were reet good, like.  I took my camera out with me and managed to repeatedly forget that I had it, so only took the one picture which ended up an out-of-focus shot of Rich’s eye – but still, I think it looks quite good!  Attempted to make it to the Harper’s “demolition” party after the gig, but alas it had finished by the time we arrived, so crashed on Mum and Dad’s settee with Milly, to be awoken by Rich ‘talking to God on the big telephone’ early in the morning!

So yes, pear cider has it’s drawbacks!  It means I even had to turn my nose up at an opportunistic fry-up that Dad was concocting in the kitchen as I was again roused from my slumbers.  Gutted!