What came first, the cockatiel or the egg?

Our birdie soap opera has kicked into egg mode again. Frankie, the lead actress in this saga, has just laid the second of her latest clutch of eggs. It’s probably about the fourth or fifth round of eggs we have had from her. Earlier in her would-be mothering career she would be the picture of dutiful momma bird.

This would involve her incubating her increasing-by-one-every-two-days clutch in a surprisingly well poised manner. Cockatiels don’t poo in their ‘nest’, so she would gratefully emerge from the cage of a morning to unleash what can only be described as a power dump, having a wing-stretch and returning to duty. At this time we would pop her in a different cage from the other two.

Whilst Frankie was distracted by toilet matters and getting a fly her fascinated room mates would steal into her new cage and attempt to juggle the eggs under them. Cockatiels are apparently likely to sit on each other’s eggs – quite sweet really. That said, both Lloyd and Phoebe are incredibly clumsy at this act, so it’s a good job they are unfertilised!

Egg production is an energy intensive business, naturally we researched and there were two schools of thought on how to deal with the situation. One was what we’d been doing – leaving her with the clutch until she realises they won’t hatch and abandon them. Quite sad. The other was to whip the eggs out as quick as possible after they arrive, which we’ve now adopted.

It seems to have had an interesting effect – the first time I was gutted to take them away, I’d wait for the ‘poop flight’ before sneaking the eggs away, only to find her return and look confused. Quite heartbreaking really. Over time though she’s increasingly lost interest in her eggs – this latest round of laying has seen her prepare her spot a few days before, then when the time comes pop down to the floor of the cage and squeeze the egg out. 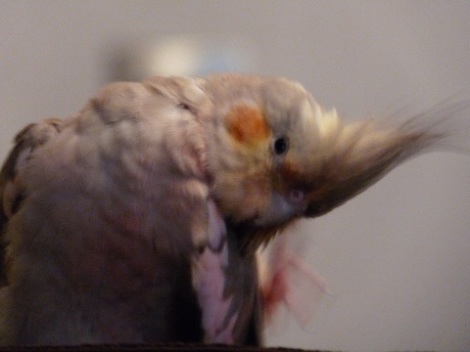 The only reason I have noticed this recent two was because ‘aunty Phoebe’ was scrabbling around trying to look after the egg. Meanwhile, Frankie is sitting chilled out on one of the top perches with little or no interest in the younger monster giving her prospective chicks brain damage. So I can easily enough nick the egg out the cage and then await potential sequels usually almost bang on 48 hours later.

Lloyd, meanwhile, just ignores the whole situation in his own (okay, her own!) self-centred little world!