Checkin’ out the birds at the seaside… 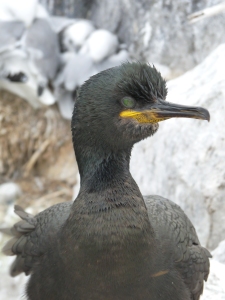 Nice Shag! Or is it a Cormorant?

I’m not sure whether all primary schools have a prolonged fixation with sea birds or whether it was just ours – or whether perhaps it as a subject as a young’un that I engaged with more than others, but certainly it came in handy during a break we’ve just been on in Northumberland.

Of course, people such as myself from landlocked Nottinghamshire have an extra level of fixation with all things seaside given it is such an alient concept to the shire of our birth!

It was quite evoking of that time at ickle school – a lot of our learning of such things was ostensibly to prepare us for a field trip to Whitby in Yorkshire a little further down the Eastern coast of England to where we’d be eventually.  Indeed, we were so northern near Seahouses that we were above Hadrian’s wall, and quite a sizeable chunk of Scotland.

A boat trip was duly booked to take us on a tour of the Farne Islands including a landing at Inner Farne were the promise of Puffins and being divebombed by protective Terns was our reward.  A ‘sea legs’ pill or two downed and certainly the choppy waters didn’t cause me any issues, although they did seem to knock me out for a good day and a half after!

So thanks to the efforts of Mapperley Plains Primary School I was quickly spotting Guillemots, Kittiwakes, Puffins, Gannets, assorted Gulls including black masked, herring and black backed variants as well a couple of elusive Razorbills.  I still struggle to tell the difference between a Cormorant and a Shag though, although oddly have been half-remembering a story we read during the same kind of time involving a cormorant and some kind of treasure linked to the Spanish Armada. 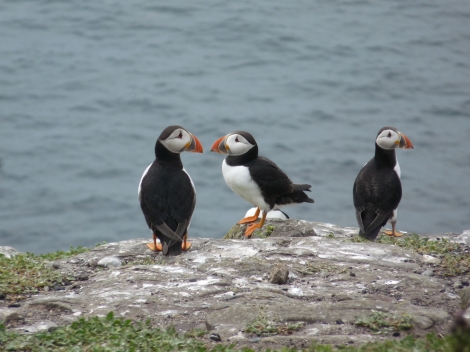 As seems to be normal for my random school-based recollections Google has been as good as useless as finding a reference to it.  I can only assume that my school had a raft of very obscure material that no other bugger used!  If anyone remembers some kind of tale involving The Spanish Armada, a Cormorant and some kind of treasure (and possibly called, or featuring a landmark called, ‘Armada Rock’ then let me know!

A twinged ankle has curtailed my plan to do a walk in Avebury tomorrow, nothing too serious but I didn’t want to risk a long walk on it as the three peaks challenge looms large at the end of the month – plus an unplanned diversion on Sunday would’ve also been a nuisance if I had ended up immobile.

Before we went away Grandad passed away in Hayward House at the City Hospital – finally at peace after a tough struggle with cancer.  His funeral’s next week, and whilst of course the occasion is always sad it’ll be nice to catch up with the family, and of course it’s much better that he’s no longer suffering in a hospital bed.

On a lighter note – the rest of the photos are here on Facebook.  I’ll warn you now they comprise pretty much of lots of birds and a few seals!

2 thoughts on “Checkin’ out the birds at the seaside…”