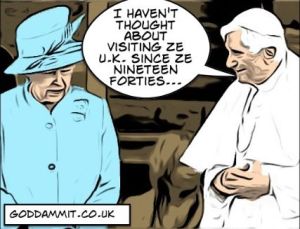 I can’t really be arsed to get worked up about millions of our collective money – in a time of ‘austerity’ – being spunked on Pope Benedict the sixteenth’s state visit to the UK.  Sure, I’m not a religious man, and the Catholic faith is probably quite low down on my list of favourite religions, but still.  Okay, I do get quite worked up about it.

I am disappointed however.  Since my immune system conspired against me I was ensconsed infront of daytime TV (a disappointment in itself!) when he was greeted in Scotland by the Queen – head of a rival church, but fellow German, but never a member of Hitler Youth (as far as I’m aware).

What really left me gutted was that Prince Philip, perpetual casual racist and national embarrassment, didn’t take the opportunity to finally utter something entirely inappropriate.  Perhaps he finally met a state visitor with whom he has a strong affinity for their views on other cultures and races… either way, a disappointment.

Of course, for the pun-factor, I really hope over the next few days that somebody eggs Benedict!  In the meantime I’ll have to settle for farting around with ‘ToonPaint’ on my iPhone, an awesome app I recently rediscovered!!